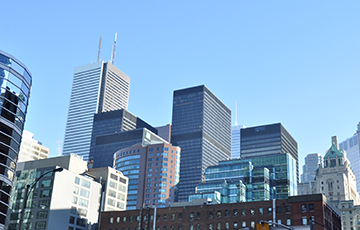 InfoPensions includes announcements and reminders on matters relevant to federally regulated private pension plans including pooled registered pension plans. To receive email notifications of new items posted to OSFI’s website, including this newsletter and other pension-related documents, please subscribe using Email Notifications. If you have any questions about the articles you read in InfoPensions or if you have suggestions for future articles, please contact us at pensions@osfi-bsif.gc.ca. We expect to post the next issue of InfoPensions in November 2021. 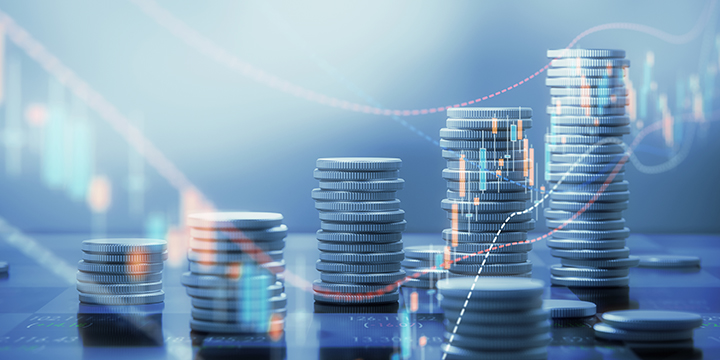 The first goal in OSFI’s 2021-22 Departmental Plan is to improve the preparedness and resilience of federally regulated financial institutions (FRFIs) and pension plans to financial risk. This goal applies to both normal conditions and during the next financial stress event. To support this goal, OSFI’s key objectives for 2021-22 as they relate to pension plans include

According to the Departmental Plan, success in this goal will be characterized by pension plans having effective governance and risk management practices that keep pace with existing and emerging risks and that support the early detection of issues, among other things.

An important part of the work that OSFI and its Private Pension Plans Division (PPPD) are advancing to address this goal is to implement the recommendations stemming from our recently completed review of how we supervise defined benefit pension plan investments. This review looked at existing PPPD investment guidance, our supervisory approach and practices and the investment information that we collect through regular pension plan filings.

PPPD staff worked closely with OSFI supervisors of FRFIs to evaluate how their knowledge and perspective from supervising banks and insurance companies could help identify ways of improving PPPD’s own supervisory approach and regulatory guidance on pension plan investment risk management.

The review has enabled OSFI to develop a broad perspective on the general nature and level of inherent pension investment risks, and insights into the nature and quality of risk management. An analysis of findings has identified areas where additional OSFI guidance can help promote more robust investment risk management practices among the pension plans OSFI regulates.

PPPD intends to issue a discussion paper in late autumn 2021 that will propose a broad range of principles-based regulatory expectations relating to investment risk management practices. Because they will be principles-based, the proposed regulatory expectations will be both scalable and proportional, meaning that they can be adapted to reflect the relative complexity of different pension plans’ investment approaches and strategies.

The discussion paper will set out proposed directions for future PPPD regulatory guidance and expectations, and seek stakeholders’ input. PPPD will then consider that input before developing and releasing final guidance on investment risk management practices for pension plans. 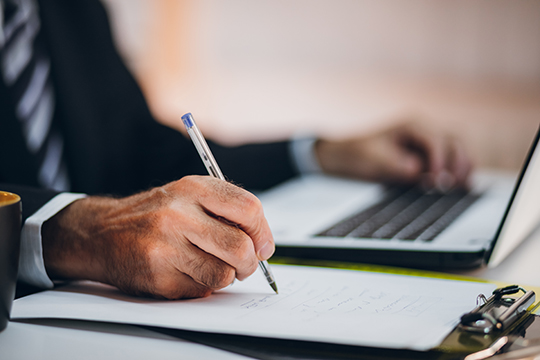 Electronic communication is the method most used to communicate important changes and requirements to the pension plans OSFI regulates. A reminder that plan administrators have a responsibility to review and update their pension plan’s Organization Profile in the Regulatory Reporting System (RRS) as soon as changes occur. On occasion, when OSFI reaches out to plan administrators to provide relevant plan-related information, some emails bounce back which informs us that a number of plan administrators are not updating this information in a timely manner.

The Organization Profile for each pension plan includes primary contact information for individuals or organizations responsible for the various roles associated with the pension plan (e.g. plan administrator, pension fund custodian, actuarial firm, etc.). Instructions on how to update the Organization Profile can be found in the Manage Corporate Returns User Guide on the RRS Training and Support for Private Pension Plans page of OSFI’s website.

As previously communicated in InfoPensions – Issue 16 (November 2016), it is important for RRS users to be aware that updating information in RRS in the Organization Profile does not have the effect of updating the RRS access and filing permissions for the plan. Information on how to create, edit and deactivate RRS Portal Users’ and Local Registration Authority’s accounts is available in the Documents section of RRS. For further assistance, please contact the Bank of Canada at 1-855-865-8636 and follow the instructions to reach RRS Support.

In December 2020, OSFI and the Financial Services Regulatory Authority of Ontario (FSRA) established a special purpose technical advisory committee that will assist both regulators in developing better processes, guidance and approaches to regulation of the defined contribution plans.

Further information on this committee as well as meeting summaries are available on OSFI’s website.

Revisions to the Directives and related FAQs

New FAQs for the Directives of the Superintendent contain further information on the conditions currently applicable to portability transfers and annuity purchases.

OSFI also revised the Directives of the Superintendent pursuant to the Pooled Registered Pension Plans Act to reinstate the pre-pandemic filing deadline for regulatory returns.

OSFI has communicated changes to its expectations throughout the COVID-19 pandemic and has revised its FAQs to those that remain relevant. If you have a question that is not addressed in these (or other) FAQs, please send your question to information@osfi-bsif.gc.ca.

On January 11, 2021, OSFI launched a three-month consultation with the publication of a discussion paper Navigating Uncertainty in Climate Change: Promoting Preparedness and Resilience to Climate-Related Risks. The paper outlines climate-related risks that can affect the safety and soundness of federally regulated financial institutions and federally regulated pension plans. The consultation period ended on April 12, 2021 and OSFI is currently reviewing the submissions received from stakeholders.

This year, OSFI will be conducting a review of all of its pension related guidance to determine where changes are needed to reflect the 2020 Agreement Respecting Multi-Jurisdictional Pension Plans, the revised Standards of Practice for Pension Plans of the Canadian Institute of Actuaries and the revisions to the Directives of the Superintendent pursuant to the Pension Benefits Standards Act, 1985. In the meantime, if you have any questions regarding any existing discrepancies or inconsistencies in our guidance, please contact OSFI at information@osfi-bsif.gc.ca.

In addition to the revisions to the Directives and related FAQs noted in the earlier article, the following documents were posted to the OSFI website since the last edition of InfoPensions:

The ESR results are calculated using the most recent actuarial, financial and membership information filed with OSFI for each plan before the analysis date. Assets are projected based on either the rate of return provided on the Solvency Information Return or an assumed rate of return for the plan. Solvency liabilities are projected using relevant commuted value and annuity proxy rates from the Canadian Institute of Actuaries. Expected contributions, benefit payments, and expenses are taken into account and an ESR based on the estimated adjusted market value of the fund and estimated liabilities is then calculated for each plan. 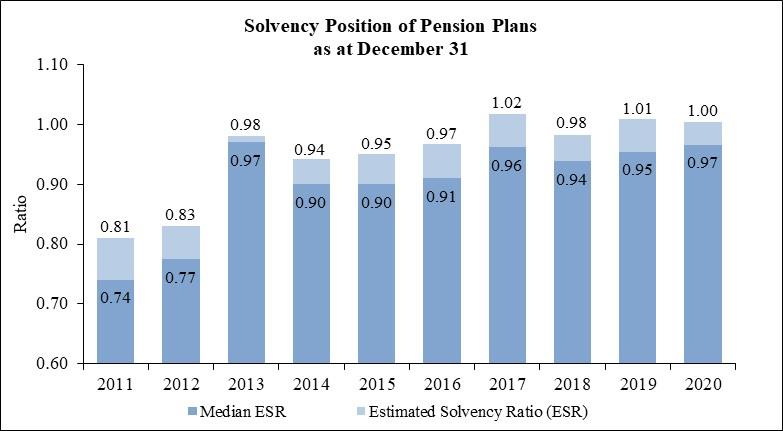 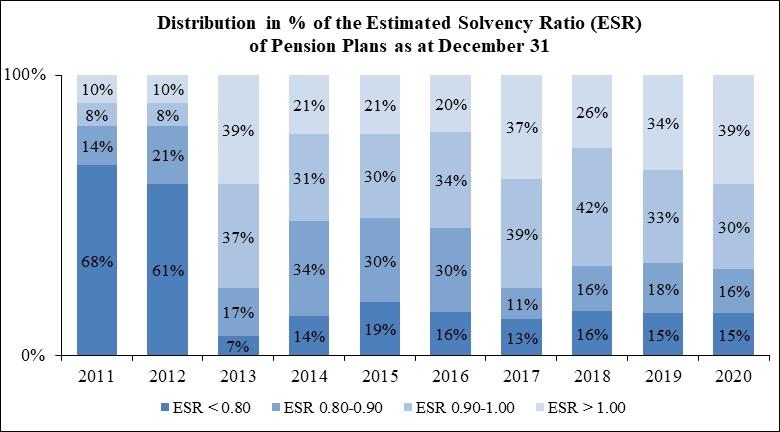 Actuarial reports submitted to OSFI are generally reviewed by each plan’s Relationship Manager in PPPD, who may refer the report to the division’s actuarial team for a more detailed review.

The Instruction Guide for the Preparation of Actuarial Reports for Defined Benefit Pension Plans sets out the reporting requirements for actuarial reports filed with OSFI. Based on the Canadian Institute of Actuaries (CIA) Standards of Practice, it is expected that plan actuaries provide sufficient details in their actuarial report to enable another actuary to assess the reasonableness of the data, assumptions, and methods used.

OSFI would like to share with plan actuaries its expectations relating to the following items that warranted a more detailed review in some actuarial reports:

In accordance with subsection 2(1) of the Pension Benefits Standards Regulations, 1985, solvency assets used in the determination of the solvency ratio for a pension plan with defined benefit provisions are equal to the market value of assets plus the face value of letters of credit minus the estimated expenses of winding-up the plan. OSFI expects the assumed termination expenses (also referred to as wind-up expenses) to be sufficient to provide for expenses that may reasonably be expected to be paid from the pension fund between the valuation date and the wind-up of the plan, i.e. the date when all plan benefits are settled and assets are distributed.

While size can be a good indicator to assess the reasonableness of the provision for termination expenses, plan specific characteristics such as membership profile and the complexity of the plan’s provisions should also be considered. The determination of the provision should be consistent with the postulated termination scenario.

The termination expense provision would usually include

In addition, the termination expense provision should allow time to

In accordance with the Instruction Guide for the Preparation of Actuarial Reports for Defined Benefit Pension Plans, it is OSFI’s position that the best estimate rate of return on assets used in the determination of the going concern discount rate should not exceed a certain level to ensure the assumption used by actuaries in their actuarial reports remains reasonable. OSFI monitors financial market conditions and future expected returns and is currently of the view that generally the discount rate for a plan with a fixed-income allocation of no more than 50% should not exceed 5.75%, before implicit margins for adverse deviations and expenses.

The following examples illustrate how to apply OSFI’s maximum in the determination of the going concern discount rate under three scenarios:

In January 2021, the Bank of Canada and the Regulatory Reporting System (RRS) Support team sent emails to all filers regarding BoC Connect, the new login portal for RRS. The email provided instructions on setting up a BoC Connect account and temporary password. Please note that filers must now access RRS through the BoC Connect Login Page.

The recommended browsers for use with BoC Connect are Google Chrome or Microsoft Edge.

If you require assistance accessing RRS, please email the Bank of Canada at operations-consultation@bankofcanada.ca or call 1-855-865-8636.

In the 2016 article on Electronic Filing of Documents with OSFI, OSFI encouraged plan administrators, custodians, and other pension plan professionals and service providers to submit documents electronically where these documents were not required to be filed through the Regulatory Reporting System (e.g. applications that require the authorization of the Superintendent).

On May 13, 2021, Jeremy Rudin, the Superintendent of Financial Institutions, was the speaker for the Association of Canadian Pension Management’s (ACPM’s) Roundtable Broadcast – Emerging from 2020 into 2021 and Beyond: The Pension and Financial Sector Environment of Today and Tomorrow.

In his remarks, Superintendent Rudin addressed the importance of thinking beyond measures of financial risk to consider climate risk and other Environmental, Social and Corporate Governance (ESG) factors. The Superintendent then joined moderator and ACPM board member Ken Burns for a question and answer session with the audience.

A video recording of the ACPM’s Roundtable Broadcast can be found at the following link.

As part of its ongoing commitment to be responsive to stakeholder input and to continually improve performance, OSFI periodically consults with pension plan administrators and professional advisors through an online survey. Results from the last survey conducted in fall 2017 can be found on OSFI’s website.

This year’s survey was conducted by means of an online questionnaire and was administered by Phoenix Strategic Perspectives Inc., an independent third party. In the survey, respondents answered questions about their perceptions of OSFI’s performance including effectiveness at supervising pension plans and the measures OSFI put in place due to the COVID-19 pandemic. Thank you to all stakeholders who participated in the survey.

The results of the survey are expected to be available on OSFI’s website in late summer/early fall.

Sylvia Bartlett, Manager of the Policy team in OSFI’s Private Pension Plans Division will be retiring at the end of June 2021. Claire Ezzeddin, who is currently on parental leave, will be taking on this role upon her return in July 2021.

Linda Steele, Senior Approvals Officer in OSFI’s Private Pension Plans Division will be retiring at the end of June 2021.